During the last VMworld Europe VMware announced vSphere 6.5, the latest version of its industry-leading virtualization platform.

The new release brings Virtual Hardware v13 and VMs can now support up to 6 TB of memory. The UEFI secure boot for guest OS as well as a simplified user experience enforce the VMware platform introducing some big enhancements in the following areas:

Migrating to the vCenter Server Appliance is no longer an issue as the installer has a built in Migration Tool that allows a more granular selection of migrated data: 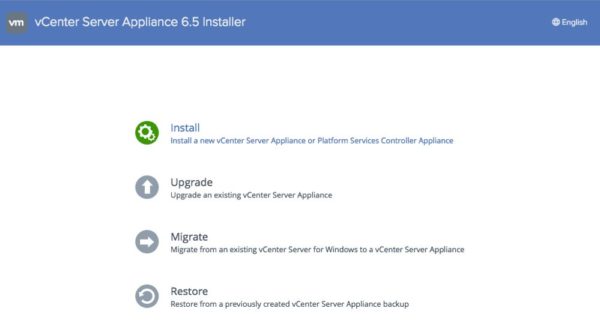 Compared with previous release, Migrate and Restore have been added enhancing the capabilities of the Installer.

VMware Update Manager (VUM) has been fully integrated into vCenter Server Appliance. No need to have a separate Windows server for VUM.

During the migration process the vCenter configuration, inventory, and alarm data is migrated by default.

The new release brings an improved appliance management capabilities. The GUI now shows network and database statistics, disk space, and health in addition to CPU and memory statistics which reduces the reliance on using a command line interface for simple monitoring and operational tasks.

vCenter Server 6.5 has a new native high availability solution that consists of Active, Passive, and Witness nodes which are cloned from the existing vCenter Server. Failover within the vCenter HA cluster can occur when an entire node is lost (host failure for example) or when certain key services fail.

The version 6.5 is still based on the Adobe Flex platform and requires Adobe Flash to use. Most significant improvements introduced in the new release are the following:

Some of the benefits in the new vSphere Client: 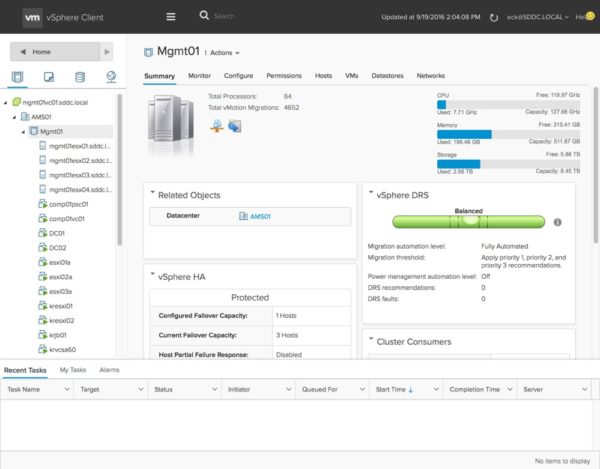 With the new release 6.5 it is now possible to encrypt VMs in order to protect against unauthorized data access. Also vMotion is now encrypted increasing the security during data at-rest and data in-motion.

Secure Boot is another feature implemented in this release that prevents the loading of unauthorized components during startup. It protects both the hypervisor and the guest operating system.

The enhanced Audit-Quality Logging capabilities help the IT to better understand who did what, when, and where on a vSphere system.

vSphere 6.5 brings new features to the datacenter that confirms the evolution of vSphere and consolidating VMware's leadership in virtualization market.