VMware released vSphere 6.5 Update 1 enforcing the product stability and allowing customers who are on vSphere 6.0 Update 3 to upgrade to vSphere 6.5.

All patches available since the release of vSphere 6.5 have been included in the Update 1.

Upgrade from vCenter 6.0 U3

Customers using 3rd party virtual switches such as the IBM DVS 5000v, HPE 5900v, and Cisco Nexus 1000v will need to migrate off of those switches prior to upgrading to any future release. Additional info can be found in the VMware knowledge base.

Update 1 brings some enhancement in the vCenter Server increasing the number of supported vSphere Domains (SSO).

In vSphere 6.5 Update 1, VMware is now increasing the number of hosts that vCenter Server Foundation will support from 3 host to 4.

The HTML5-based client (accessed via https://<vcenter>/ui) is faster, lighter and requires no plugins to run.

With Update 1 the client increased the functionality in areas related to Virtual Distributed Switch (VDS) management, datastore management, and host configuration getting about 90% of general workflows completed.

vSphere Update Manager (VUM) has been integrated into vSAN providing an automated update process to ensure a vSAN cluster is up to date with the best available release to keep your hardware in a supported state using information from the VMware Compatibility Guide, the vSAN Release Catalog, and awareness of the underlying hardware configuration. 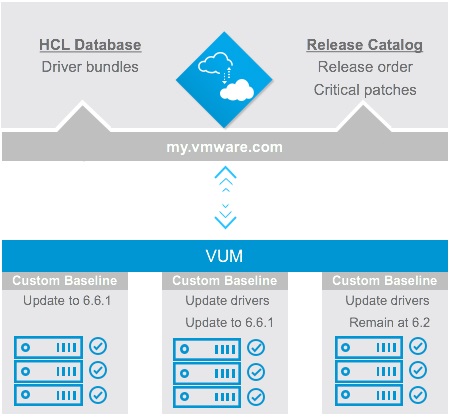 VDI and ROBO licensing editions are expanded with the Enterprise edition that allows encryption and stretched clusters.

For additional info check out the vSphere 6.5 Update 1 Release Notes.