VMware just released the vSphere 6.5 Update 2 that introduces some new features and enhancements as well as the support for the Enhanced Linked Mode (ELM) when the vCSA is deployed with an Embedded Platform Service Controller (PSC).

Upgrading to vSphere 6.5 Update 2 has some requirements and limitations:

As reported by VMware, the Update 2 introduces the support for the Enhanced Linked Mode (ELM) when deployed with an Embedded Platform Service Controller (PSC). This solution reduces the number of virtual machines to manage as well as removes the need for a load balancer for high availability. Enhanced Linked Mode using an Embedded Platform Service Controller is only supported for greenfield deployments. 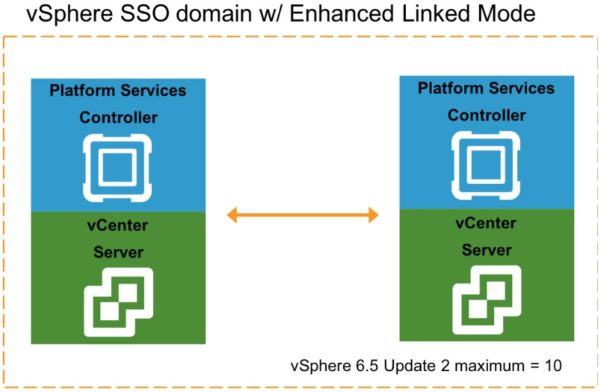 Enhanced Linked Mode (ELM) is a feature of vSphere that allows the administrators to connect multiple vCenter Servers if they need to manage a number of hosts or VMs that exceed the maximum supported by a single vCenter Server instance making the management easier.

Some improvements reported in the vCenter Server 6.5 U2  Release Notes are:

Some additional features have been added to the hypervisor as reported in the ESXi 6.5 U2 Release Notes.

Before proceding with the upgrade to vSphere 6.5 Update 2 make sure to understand the requirements and limitations before affecting your network functionality.