The procedure to restore a failed vCSA connected to Distributed vSwitch (dvSwitch) could be tricky if the infrastructure uses dvSwitches with no ephemeral port group available.

In an environment running Distributed vSwitches, the vCSA binding to the dvSwitch virtual port can behave weirdly with the result of losing the connection with the virtual machine.

This article has been written for StarWind blog and can be found in this page. It covers the full procedure to properly restore the vCenter attached to a dvSwitch configuring a port group as Ephemeral.

Restoring the vCSA connected to dvSwitch

In case of a vCSA failure, the first action normally performed by administrators is the restore of the VM from the backup. 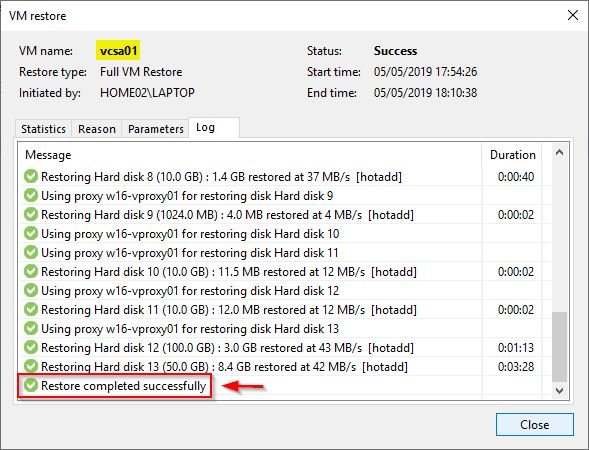 Anyhow, even if the restore completes successfully the ping to the vCSA is not responding and the VM is unaccessible from the network.

If the vCSA is attached to a dvSwitch to access the network and all vmnics are assigned to the dvSwitch, the only possible solution to recover the vCSA functionality is the creation of a temporary virtual switch (vSwitch) using a vmnic detached from the dvSwitch.

When the procedure has been completed, you are able to ping and access the vCSA once again.